A mid-range storage revolution, a new era started in September 2013, introduction of VNX-2 Multicore systems, brought many improvements in product features . With Multicore architecture below are the highlights of software/hardware improvements.

Here I am talking about one of the software feature which got some serious enhancements, the FAST Cache, with MCx it is Multicore FAST Cache.

Here you can find a great post from Sam Lucido which shows the comparison in performace between legacy FAST cache and Multicore FAST cache.

Operations of Multicore FAST Cache is much similar to the legacy FAST Cache. As in legacy one,  all the traditional LUNs and Thin Pools created after the FAST Cache creation will be FAST Cache enabled by default. We will have to manually enable the same for existing LUNs and Pools.

When the system identifies a 64KB block data is being accessed frequently, it promotes this block to FLASH based extreme performance Multicore FAST Cache. This is decided based on the number of accesses for that block in a specific short time period. Thus on subsequent accesses for the block, data will be accessed from the FAST Cache (FASTer drives ), which increases the IOPS for application accessing it. 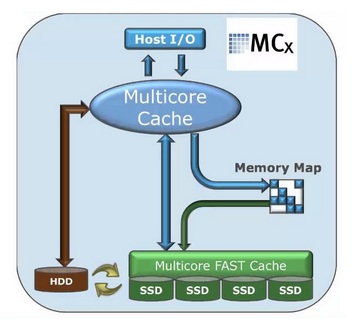 For FAST Cache configuration, I believe this post will be useful for you.