On Monday (29-Feb), EMC announced their All-Flash models of VMAX arrays. With the addition of All-Flash version of EMC VMAX 3 series of arrays, EMC is targeting to continue to maintain their position in today’s busiest storage market – the AFA Market. These new additions to their Flash Storage portfolio – alongside the existing XtremIO and the new DSSD – will help them serve different customer requirements and thus to remain in race.

As in the above snap, VMAX 450 F/FX and 850F/FX arrays gives unmatched performance with 4M IOPS and <0.5ms latency. The HYPERMAX OS is well optimized for Flash in the new products to achieve lowest latency in a high density system. It can have 1PB of usable space over a single tile space.

Hardware : VMAX 450 and 850 systems comes with V-Bricks which are equivalent to the engines in previous models. Each V-Brick with 2 directors which can have 1TB (for VMAX 450) or 2 TB of memory. A single VMAX 450/850 cabinet can have upto 2 V-Bricks and 480 drives. Customers can upgrade -Scale Up- the capacity in 13TB flash packs and Scale-out the performance by adding more engines. 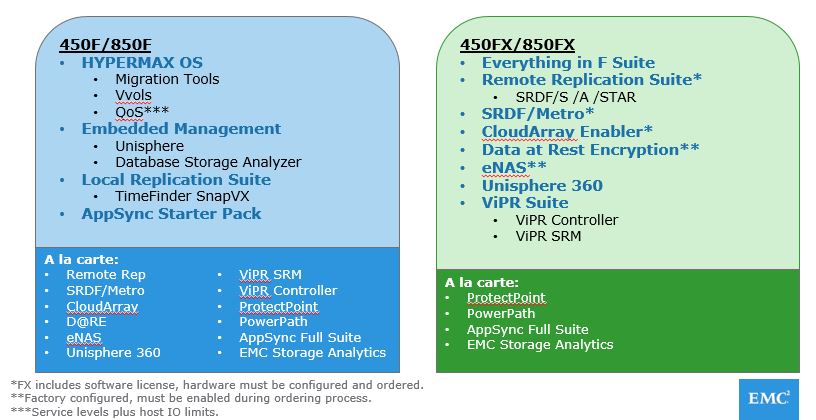 VMAX AF systems will offer multi-dimensional scalability (Ports/ Devices/ Capacity), World class BC/DR (With SRDF and SnapVX) and various data services including Mainframe, eNAS etc… This will cater different customer needs when compared to the XtremIO from EMC All-Flash family. More to come in near-future as they plan to have even denser configuration as they switch to newer high capacity SSDs.