With FLASH, things are changing ‘in a flash’ !?

The data storage industry has gone through major changes in the past 5-7 years. And is still in the phase of changes. The user requirements has changed from “More GB’s or TB’s” to “More IOPS”. Introduction of FLASH drives been a catalist for these changes along with the other changes in hardware and software industries. FLASH as a Storage drive or PCIe memory is playing an important role now a days and that gave raise to many new technologies and products.

All-FLASH Storage Arrays : Many new storage companies started with AFA products and they managed to become the customer’s first-choices for the AFA arrays. As they started with AFA, they had their hardware and software designed/optimized for a complete-flash configuration. Now we are seeing the competitions between the existing players and the new comers to secure their place in the market. Their (the hybrid vendors’) success will be measured on how the well the Operating Environment (in-use for hybrid) is now optimized for an AFA configuration.

With the variety of FLASH memory modules available – NVRAM, PCIe FLASH, SSDs – the AFA’s are going Hybrid AFA’s also.That shows the degree of change from HDD-based storage to Hybrid-Storage to AFA’s and then to Hybrid-AFAs.

NVMe, 3D XPOINT and more… : The increasing demand for FLASH lead to many researches and many new technologies including Intel’s NVMe and 3D XPoint, the recent. FLASH memories made their entry as server-side PCIe FLASH initially and now storage systems as PCIe FLASH (Along with SSD drives) . NVMe was introduced as a Standard protocol for accessing PCIe FLASH. Read more about NVMe here

3D XPoint introduced a memory architecture with higher performance and low cost, which can be a mid-layer for DRAM and FLASH (can be up to 1000x faster than NAND and up to 1000x  the endurance) . 3D XPOINT combines the advantages of existing technologies like the performance of DRAM and lower cost and volatility of NAND. This new technology was announced by Intel and Micron in the mid of 2015. 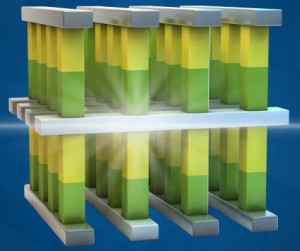 A post mentioning 3D XPOINT will be incomplete without this architecture diagram. Courtesy : intel.com

With the stackable memory architecture 3D XPOINT have an improved density (more memory in less space). Data cells are read by varying the voltage being sent and this reduces the need of transistors. This is another reason for cost reduction. Faster cell switching and fast-write algorithm reduces the latency of IO in 3D XPOINT technology. Being comparatively new technology, 3D XPOINT will take few more months to have a real impact in the market.

Intel Optane technology of new Intel SSDs with high performance and high endurance is based on the 3D XPOINT technology.

SFD8 presentation from Intel had a lot about NVMe and 3D XPOINT. Looking forward to their presentation at SFD9 in March. They may have many thing new to discuss this time, 6 months is a long time.

Here you can find more posts from me on SFD8.

Disclaimer: My travel and accommodation expenses for the SFD8 (Storage Field Day 8) event were paid by the Tech Field Day team. I am not requested to post about event content and I am not getting paid for any posts or for the time I spend during the event.